Zhang Jingtong
Yu Ziyuan (虞紫鸢, Yú Zǐyuān) was the wife of the former leader of the Yunmeng Jiang Clan, Jiang Fengmian, and the mother of Jiang Cheng and Jiang Yanli. She also went by the titles Madam Yu (虞夫人, Yú-fūrén) and the Violet Spider (紫蜘蛛, Zǐ Zhīzhū).

Yu Ziyuan was a beautiful woman with creamy skin and ferocity in her delicate features which were said to be as cold as jade. She was a natural at sneering. She wore purple robes and a sword at her waist, as well as an amethyst ring on her right index finger.[1]

Yu Ziyuan had a cold and assertive personality. She was a formidable cultivator whose name alone could scare people away, and she frequently vented her rage on her family.[1]

Yu Ziyuan was fiercely protective of her children, willing to risk her own life to ensure Jiang Cheng's survival.[2]

The Meishan Yu Clan pressured Jiang Fengmian into marrying Yu Ziyuan after the elopement of Cangse Sanren and his servant Wei Changze.[1] Although Yu Ziyuan moved to the Yunmeng Jiang Clan, she frequently went away on night-hunts. In addition, she and Jiang Fengmian lived in separate parts of Lotus Pier. By marrying into the Jiang Clan, she would have normally assumed the title Madam Jiang, but everyone referred to her as Madam Yu.[1]

When her husband brought Wei Wuxian back to Lotus Pier after the death of his parents, Yu Ziyuan became frustrated with what she perceived as Jiang Fengmian's favoritism of Wei Wuxian over Jiang Cheng.[5]

She placed heavy pressure on Jiang Cheng to surpass Wei Wuxian in cultivation and frequently verbally and physically abused both of them.[1]

Not long after, Wang Lingjiao arrived at Lotus Pier while Jiang Fengmian was away and immediately arrested a disciple. Although Yu Ziyuan was displeased by the woman's conduct, she restrained her temper as Wang Lingjiao critiqued the decor and layout of Lotus Pier. She did, however, defend Jinzhu and Yinzhu against Wang Lingjiao's assertions that they should be disciplined as servants.[6]

Once Wang Lingjiao demanded punishment for Wei Wuxian's actions, Yu Ziyuan whipped him with Zidian dozens of times in an attempt to satisfy her. When Wang Lingjiao insisted on severing his right hand, Yu Ziyuan initially appeared to concede, asking Jinzhu and Yinzhu to close the doors.[6]

Once Wang Lingjiao mentioned the supervisory office to be set up in Lotus Pier, Yu Ziyuan sent her flying with a single slap. Jinzhu and Yinzhu slaughtered the Wen cultivators in seconds, and Yu Ziyuan drew her sword to kill Wang Lingjiao.[6][2]

Unfortunately, Wen Zhuliu had heard Wang Lingjiao's screams, and come to her rescue. Wang Lingjiao then sent a signal for the Qishan Wen Clan to attack Lotus Pier.[2]

Cognizant of the perilous situation, Yu Ziyuan left Jinzhu and Yinzhu to battle Wen Zhuliu as she took Jiang Cheng and Wei Wuxian to the pier. She bound them both with Zidian, commanded the weapon not to release until they were safe, and told Jiang Cheng he would own it now.[2]

She then embraced and kissed her son as she never had before, before asking Wei Wuxian to promise her to protect Jiang Cheng with his life. She watched until the boat was far away before returning to Lotus Pier with her sword in hand.[2]

When Wei Wuxian and Jiang Cheng returned later that night, they discovered that Wen Zhuliu had killed Yu Ziyuan during the massacre after melting her Golden Core, though he prevented Wang Lingjiao from slapping her body.[7][8]

Swordsmanship: Yu Ziyuan spent most of the battle at Lotus Pier fighting with a sword.[2]

Zidian: Yu Ziyuan was the original owner of Zidian, before passing it to her son Jiang Cheng.[2]

Jiang Fengmian did not find Yu Ziyuan agreeable, and only consented to the marriage after the woman he had loved eloped with his servant. Their relationship became further strained after Cangse Sanren and Wei Changze died, upon which Jiang Fengmian brought Wei Wuxian back to Lotus Pier to raise as their own.[5]

Nevertheless, before returning to the massacre at Lotus Pier, Jiang Fengmian discovered that he could command Zidian, implying that his wife had underlying feelings for him after all.[2]

Yu Ziyuan frequently scolded her son, slapping him and calling him an idiot for not surpassing Wei Wuxian.[1] Despite this abuse, she spent her last moments ensuring that Jiang Cheng would survive the attack on Lotus Pier.[2]

Yu Ziyuan arranged the initial betrothal between Jiang Yanli and Jin Zixuan. Although she scolded her daughter for peeling lotus seeds instead of focusing on cultivation, she still seemed to love and care for her.[1]

Yu Ziyuan resented Wei Wuxian for superseding Jiang Cheng in cultivation and frequently expressed concern that his reckless actions would cause trouble.[5] Although Wei Wuxian referred to Jiang Fengmian as "Uncle Jiang," he only referred to Yu Ziyuan as "Madam Yu."[1]

When Wen Lingjiao demanded his punishment, Yu Ziyuan whipped him many times with Zidian, claiming he would not recover for a month.[6] Not long after leaving Lotus Pier, Wei Wuxian realized that she had not whipped him nearly as hard as she had claimed.[2] Moreover, her decision to kill Wang Lingjiao was made only after Wang Lingjiao insisted his right hand be severed.[6]

In her final moments with him, Yu Ziyuan asked Wei Wuxian to protect Jiang Cheng with his life.[2]

Jinzhu and Yinzhu were Yu Ziyuan's trusted maids who never left her side. They had accompanied their mistress to Lotus Pier from the Meishan Yu Clan,[1] where they had been trained in spiritual whips by the same master. They were able to understand Yu Ziyuan without a single word needing to be said.[2]

Although Yu Ziyuan often insisted on a hierarchy of master and servant, she made an exception for Jinzhu and Yinzhu, as no one was allowed to discipline them.[6]

Madam Jin and Yu Ziyuan were close friends since childhood. They promised each other that their firstborn children would be sworn siblings if they were the same gender or married if they were not.[3]

Yu Ziyuan had an unspecified history with Wen Zhuliu, as she once knew him by a different surname. She looked down on Wen Zhuliu's adoption of the name "Wen" as a betrayal of his ancestors. Wen Zhuliu referred to Yu Ziyuan by her title, "Purple Spider,"[2] and refused to allow Wang Lingjiao to slap her deceased body, even though he himself had killed her.[7]

The Audio Drama adds an exchange between Yu Ziyuan and Jiang Fengmian upon the latter's return to the besieged Lotus Pier. Yu Ziyuan demanded to know why he would come back, and he replied that he would not leave his lady.[9]

The donghua specifies that Yu Ziyuan's golden core was melted before she was run through with a sword. The Novel, however, does not specify how she died, merely mentioning that Wen Zhuliu was the one who killed her.[10]

In the Web Series, Yu Ziyuan killed herself after seeing Jiang Fengmian mortally wounded. In her last moments, she slipped her hand in her husband's.[11] 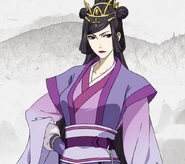 Add a photo to this gallery
Retrieved from "https://modao-zushi.fandom.com/wiki/Yu_Ziyuan?oldid=16537"
Community content is available under CC-BY-SA unless otherwise noted.